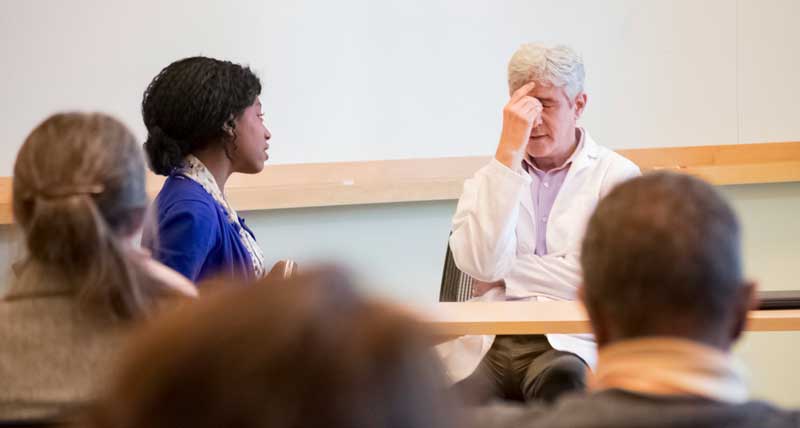 Awkward fictional moments made for productive real-life discussions at the Mentor Up/Mentor Down workshops on February 8.

A chemistry Ph.D. student approaches a faculty member about joining his lab. He agrees to take her on and immediately recommends that she apply for a fellowship for underrepresented minorities.

Early the next semester, the student tells the faculty member, now her adviser, that she feels singled out for criticism by her lab mates during a recent lab meeting. He responds that criticism comes with the territory and she needs to toughen up.

Later in the semester, the student sits down with the faculty adviser to go over the research she has been working on. Midway through their meeting, the adviser realizes that the student has been reading her results incorrectly for months and has missed out on a number of potentially valuable leads. As he points out her error, he becomes visibly exasperated at the missed opportunities.

All the while, a group of faculty members sitting in the same room look on and make mental and written notes. A few minutes later, they begin discussing how things could have gone differently.

This was the scene from Mentor Up/Mentor Down, a workshop organized by the Department of Chemistry in February to help improve relationships between STEM Ph.D. advisers and advisees. The workshop was facilitated by Theater Delta, which uses interactive theater to help organizations explore issues related to social change.

Katherine J. Franz, the Alexander F. Hehmeyer Professor of Chemistry, organized the event after participating in another Theater Delta workshop through the Duke BioCoRE program.

“For graduate faculty, training graduate students is one of the most important and impactful things we do,” said Franz, the chair of the Chemistry Department. “I wanted to organize this event because I feel strongly that spending time reflecting on ways to improve our student-adviser relationships can pay large dividends in terms of advancing our research agendas, avoiding conflict escalation, and generally improving our collective work environment.” 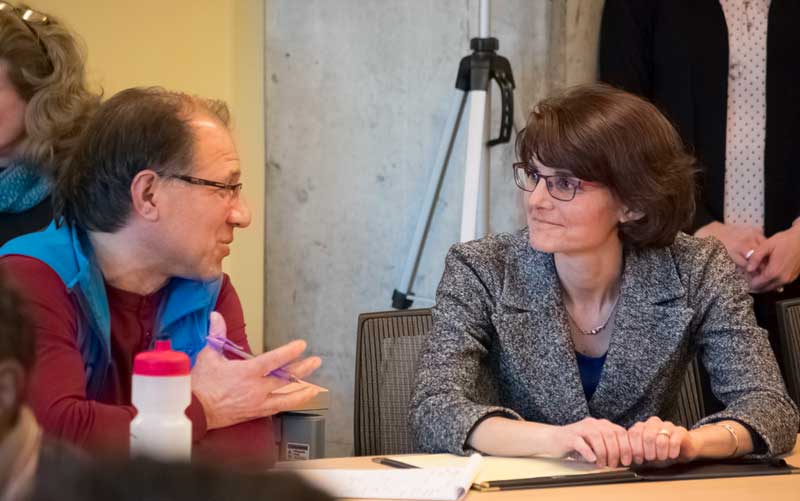 Professor Katherine J. Franz (right), who organized the workshop, said it spurred useful discussions among the faculty members who attended.

In each workshop, two professional actors performed several skits portraying typical scenarios that might arise in Ph.D. advising. After the skits, the actors, staying in character, fielded questions from the participants about their characters’ thoughts and motivations. A trained moderator—a faculty member from another institution—then facilitated discussions among the participants.

“It was a really good environment to get faculty members talking about the kinds of issues they face with students and also the kinds of issues that students have,” said Jacqueline Looney, The Graduate School’s senior associate dean for graduate programs, who attended the faculty workshop. “It was a safe place to begin to work on interpersonal issues.

“The situations that were acted out felt real. Faculty members get to stand outside of the situation and see an exchange between a faculty member and a student. It gave another perspective for faculty members on how they respond or don’t respond to certain situations. It also gave feedback about the kind of things that students can hold to themselves until it’s too late.” 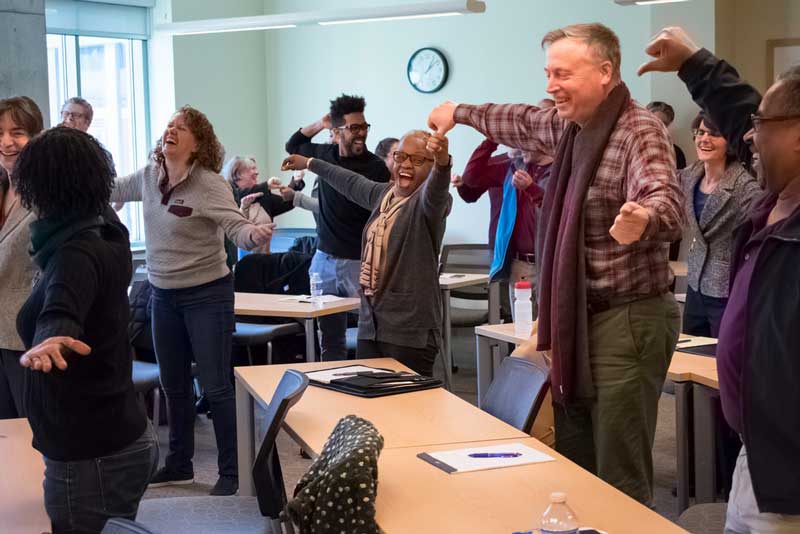 Senior Associate Dean Jacqueline Looney (center) and other administrators and faculty take part in a warmup exercise at the faculty workshop.

Franz said the scenes were very realistic and nuanced. She also found the conversations with colleagues quite useful.

“It was helpful to hear comments and questions from colleagues and realize there are many ways to approach these scenarios,” she said. “It is also helpful to reflect on these things and strive for policies and procedures that allow you to be proactive rather than reactive so that expectations are clear and decisions aren’t made under stress or time pressures. Ongoing conversations with colleagues about how to deal with different scenarios can be really helpful.”

The scenarios were designed to spur discussion and presented more shades of gray than clear-cut answers. Looney said the skit where the student felt singled out for criticism by her peers really resonated with her.

“That really struck me because that kind of situation is real for students. Whether her perception of being treated a bit more critically than her peers was true or not, it was real for her. It’s how she was perceiving it, and it affects how she navigates the lab.”

Franz said she has received positive feedback about the workshops, and that participants expressed interest in future events exploring scenarios from later stages of graduate school.

Workshops like this one can be a useful resource in addressing implicit bias and other common issues in the adviser-advisee relationship, said Looney, who oversees the day-to-day operations of the Duke University Center of Exemplary Mentoring (UCEM), a new initiative led by Graduate School Dean Paula D. McClain and Professor Calvin R. Howell.

As part of its efforts to make Duke more inclusive and supportive for underrepresented students in STEM, the UCEM co-sponsored the Mentor Up/Mentor Down workshop, along with The Graduate School, Trinity College, and the Department of Chemistry’s Committee on Diversity, Inclusion and Community.

“Events like this give us different ways of looking at ourselves,” Looney said. “They also give us some tools and strategies for how to manage situations that arise, because for sure, they are going to arise.” 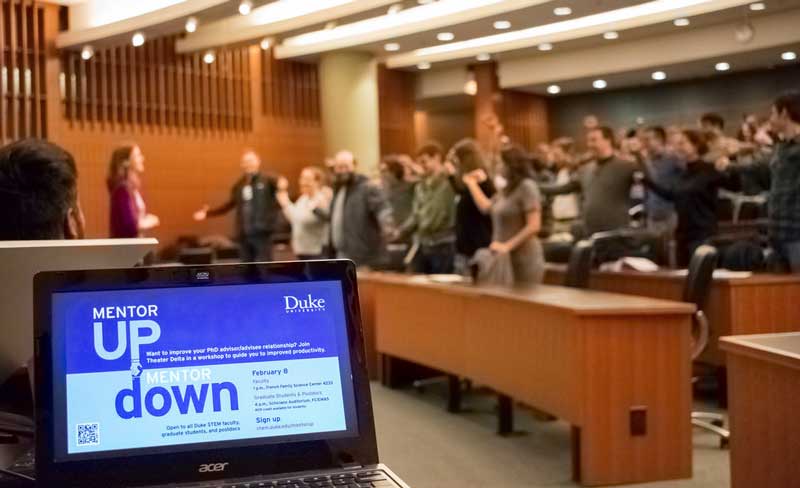 About 140 graduate students and postdocs attended the session for trainees.

UCEM launch in the news